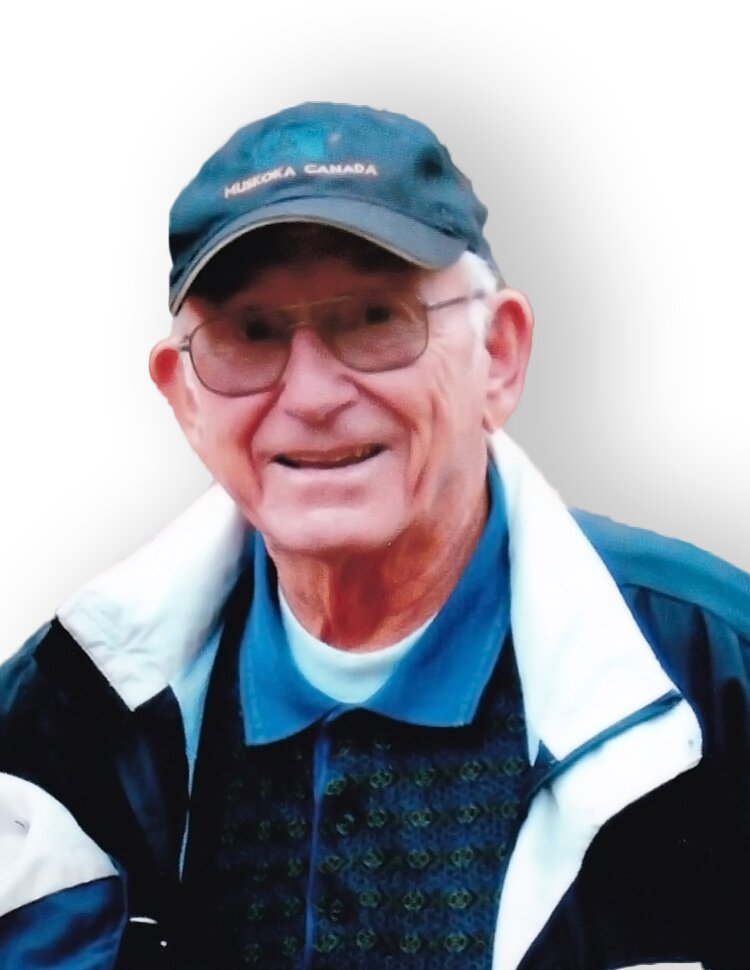 It is with sadness and regret that the family of Kenneth John (Junior) Poole advise of his passing on September 11, 2022, at the age of 93.

The eldest son of Kenneth and Margaret (Diamond) Poole, Ken was born in Hamilton and raised in Muskoka, on the Lake of Bays. He is predeceased by all of his siblings; Jean (Bob) Whittington, Gren (Jean) Poole, Pat (Bob) Hockin and infant brother, Dennis; and by dear in-laws Gord (Zoli) and Janet Biskey.

He is survived by his wife of 69 years, Elizabeth (Betty) Poole, and children Kathy, Dennis (Andrea), Ken (Heather) and Margaret Ann (Frank) Ramsay. Beloved Grandpa of Lauren and Alexandra (Darren); Andrew, Hillary and Aiden; great-Grandsons Everett and Henry, and sister-in-law Jean. Loved by many nieces and nephews and their families.

During the war years the Poole family moved to Chatham where Ken attended CVS and joined the Air Cadets, preparing to join the RCAF when fortunately the War ended. However during the War he had the unenviable (after school) job as the telegram distributor for Canadian Pacific, delivering notices from the War Department to Chatham families about casualties overseas.

He was an avid outdoorsman, who loved boating, fishing, camping and canoe tripping in Algonquin Park. He instilled the Muskoka legacy in his family where many summers were spent in the Huntsville area and Algonquin, and for many years Ken and Betty enjoyed the summers camping in Rondeau Park as well, eventually acquiring a cottage and loving the Park life even more. Of course sailing, canoeing and camping were part of the lives of all of the kids, and eventually the grandkids, and he loved his “up north” fishing trips with his brother, Gren.

Ken shared his love of the outdoors with many young men in Chatham-Kent through his 40-plus years with Scouts Canada, being a Cub and Scout Leader. As a leading member of the “Camp Committee” he contributed significantly to the building of Camp Cataraqui near Clearville; Troop 22 was known as the “work camp” group, and spent at least one weekend a month at the camp not only learning scouting and camping skills, but also learning how to do construction, wiring, forestry and a myriad of other things, including cleaning, cooking and life skills. He was a long-time volunteer with the Sertoma Highland Games, once appointed as Grand Chieftain of the Games in recognition of his contribution.

After retiring Ken went on to get his private pilot’s licence and loved flying over Chatham-Kent whenever he could. He maintained his pilgrimage to Muskoka and Algonquin and enjoyed biking around Rondeau Park, well into his 80’s. His positive attitude and mischievous smile endeared him to many.

The Family will celebrate Ken’s life with friends during a visitation to be held on September 19th from 10:00-11:30 am, at McKinlay Funeral Home, 457 St. Clair St., Chatham, followed by a service and celebration of life at 11:30 am, with a private internment later in Maple Leaf Cemetery in Chatham.

In lieu of flowers, donations to the Chatham-Kent Hospice would be appreciated by the family.

A special thank you is extended as well to the staff of the Chatham-Kent Health Alliance, Eden Villa, and Fairfield Park, for their compassion and care for Ken over these past couple of years.

Share Your Memory of
Kenneth
Upload Your Memory View All Memories
Be the first to upload a memory!
Share A Memory
Send Flowers