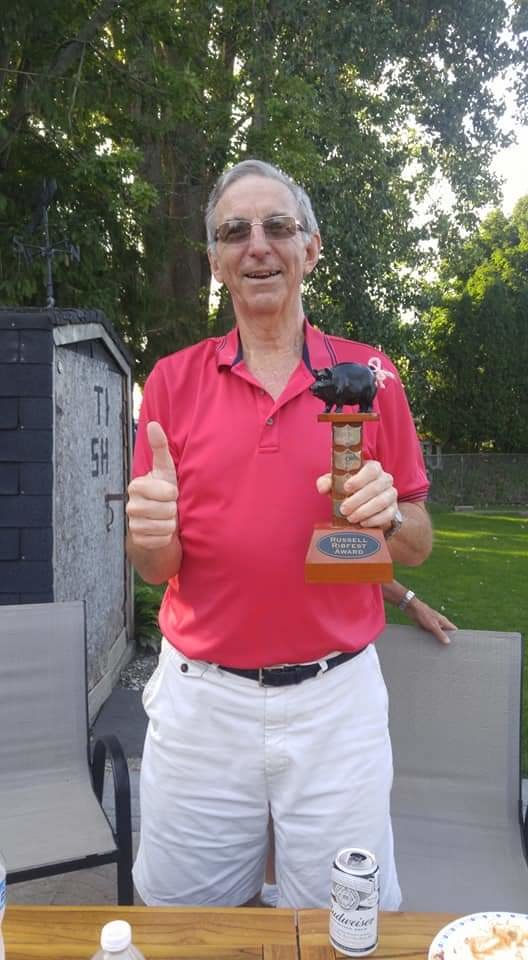 A resident of Chatham, Dwayne Russell passed away peacefully at his residence on Tuesday, August 11, 2020.

He will be missed by many nieces and nephews.

Dwayne was a star athlete from an early age, starting with baseball, football and basketball at CCI  (where he stayed an extra year mainly to play football) as well as basketball at St Clair College.  His signature 6 ft 3" height probably didn't hurt. His infamous story of trying out for the Pittsburgh Pirates at Tiger Stadium finally revealed an athletic weakness; he couldn't hit a curve ball. But he could definitely hit a golf ball!  Golf was one of Dwayne's passions second only to his love for his family. Known as Dow on the course, after legendary PGA winner Dow Finsterwald, or as some of his close friends would say standing for Dedication, Open mindedness, and  Wordly in thought and action.
He organized several events at the golf course and helped many players improve their game - he was still working on Chris'.  Dwayne starred as the center of mishaps and hi-jinks,  whether at golf courses in and around Chatham or on the many road trips he took with the boys down south every year. He always captained the RV with a co-pilot who frequently got them lost using short cuts.
He was intensely proud of his children and grandchildren and played a major role in their lives.He loved seeing the younger generations growing up, his face would light up around the young ones. He was an incredibly inspirational man in may ways. He was a very gentle man and a man of faith, someone you would strive to be or looked up to when it came to being kind and good-hearted. He was jovial and had a quick witted humour that everyone adored.
You could often find Dwayne watching for the hundredth time favourite movies like Gladiator, the 13th Warrior and The Princess Bride. He would often call his wife to leave a message with favourite quotes to make her laugh, especially  "Hello,  my name is Inigo Montoya.  You killed my father.  Prepare to die."  He was also a huge fan of westerns including John Wayne and Davy Crockett. Once he sang every verse of the Davy Crockett theme song to his future wife June on one of their first dates and somehow still managed to score another one.
Dwayne prided himself on his rib BBQ skills and was finally awarded with the 2018 Russell Rib Fest trophy. He was known for his antics at cards and finding money, including coins, then bills and finally credit cards in birthday cakes.  Dwayne had a love of giving his money to the casinos and never becoming the winner his best friend was.
He was the life of every party and never without a sly grin before saying something that threw a room into uncontrollable laughter.
Thank you to all of the support services dad received especially  to Jon Ann, Nathalie and Megan.

In light of current events, cremation has taken place with a Private Family Interment to take place in Maple Leaf Cemetery.

Online condolences may be left for the family and donations may be made in memory of Dwayne to the ALS Society of Essex County www.alswindsor.ca through the Funeral Home website (www.mckinlayfuneralhome.com).

"Lo, they do call to me, they bid me take my place among them, in the halls of Valhalla where the brave may live forever"

Share Your Memory of
Dwayne
Upload Your Memory View All Memories
Be the first to upload a memory!
Share A Memory
Send Flowers