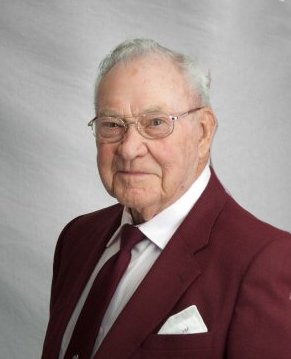 A resident of Chatham, and formerly of Highgate, Stu Jackson passed away at the Chatham-Kent Hospice with his family at his side on Tuesday, October 22, 2019 at the age of 90.

Born in Fargo, Stu was the son of the late Obed and Ellen (Pickering) Jackson.

Stu retired from Siemens after 25 years of service. He was active with the Salvation Army, Chatham Citadel and a former member of the Kent Historic Auto Club. He enjoyed driving his 54 Dodge Coupe.

Stu was a builder, and enjoyed remodeling his family home with his wife Bernice. He also enjoyed tending to the yard and the gardens. He was an avid hunter, and enjoyed hunting with his sons. He loved to watch hockey, particularly his grandchildren and the Toronto Maple Leafs.

He will be remembered as a good father, a good husband and a good provider.

As per Stu's wishes, cremation has taken place with a private family interment to be held at Evergreen Cemetery, Blenheim at a later date.

Donations made in memory of Stu to the Salvation Army or Chatham-Kent Hospice Foundation would be appreciated.

Share Your Memory of
Stu
Upload Your Memory View All Memories
Be the first to upload a memory!