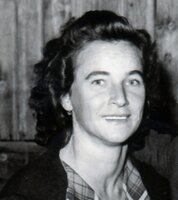 A resident of Chatham, Bruna Argenti passed away at Eden Villa on January 22, 2023 with her family at her side, at the age of 97.

Born in Trieste, Italy, Bruna was the daughter of the late Jacamo and Carolina (nee Grandis) Crevatin.

Bruna is predeceased by her sisters Maria, Nora and Julia. She will be dearly missed by her nephews Claude Urbani (Maritta) and Mario Urbanaz.

Bruna immigrated to Canada in 1960 with her husband and their 3 children. She worked on area farms harvesting produce and caring for her family. Bruna loved to knit and crochet, making many baby sets and sweaters for her grandchildren. She also made scarves and mittens to be sent to northern communities, numbering about 1000 sets over the years.

Family and friends will be received in the Funeral Home, 459 St. Clair Street Chatham on Wednesday, January 25, 2023 from 11:00 a.m. until the Funeral Service to celebrate Bruna's life at 1 p.m. Interment at St. Anthony's Cemetery, Chatham.

Donations made in memory of Bruna to the Canadian Diabetes Association, the Farley Foundation, or the charity of your choice would be appreciated by the family.