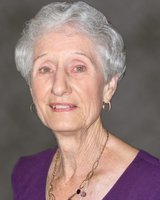 Henriette Parent (nee Lauzon) April 12, 1930 to May 11, 2020 A light in our family is gone, A voice we loved is still, A place is vacant in our hearts, No one can fill. It is with heavy hearts that we announce the peaceful passing of Henriette Parent at the age of 90 at Riverview Gardens in Chatham. Henri is reunited with her late husband Eugene Parent (May 11, 1992). She was the beloved daughter of the late Raymond and Martha (nee Joinville) Lauzon. Loving mother of Debbie DeLaroche (Ron) of Sarnia, Bruce Parent (Ruth) of Calgary, Carl Parent (Tracy) and Denise Jubenville (Craig) both of Chatham. Cherished Mémé and Great Mémé whose goodness, caring nature and cheerfulness live on in the legacy she left to her 9 grandchildren and 11 great-grandchildren. Amy (Trevor) Benjamin, Harrison, Madeleine; Nicole (Nick) Ava ; Andrea Goudreau (Joe) Bailey, Joshua, Brooklyn; Ryan Jubenville (Alicia) Hadley; Averil (Terry) Gabriel, James, Gwyneth; Seth (Katie); Rachel (Mike); Kelsey (Anthony); Nate. Survived by her sister and best friend Lorette Jackson (Ron). Pre-deceased by her dear sister Lucille Burke (John). Survived by her brother and sister-in-laws, John Burke, Raymond Parent, Sharron Parent and Fran Parent. Pre-deceased by brother-in-laws Clare Parent and Robert Parent and sister-in-law Helen Parent, and fondly remembered by many nieces and nephews. Henri was born in Tecumseh and grew up on the family farm in Maidstone. She met Gene at the Skyway Drive-in Theatre and was married in 1952. Mom worked as a bookkeeper at Sunningdale Golf and Country Club in London, where her love of golf began, and later joined the Canadian Red Cross in Chatham where she retired as Manager after 15 years. She was a devout parishioner of Blessed Sacrament and St. Agnes Churches, member of the IODE, Kinette Clubs of Chatham and London, the Active Lifestyle Centre in Chatham, and a long time member of Maple City Golf and Country Club where she formed many lasting friendships and memories. She had an active lifestyle that included bowling, line dancing, and golfing, and was a fun and devoted Mémé and Great-Mémé, always up for sleepovers, family vacations and card games and was an avid cheerleader at their countless sports and activities. She always had a book and crossword puzzle on the go, generously passed on her canning and tourtiere recipes and loved family gatherings where she would gladly show up with her chocolate zucchini loaf! Despite the burden of Alzheimer’s in her final years she faced every day with a smile on her face a cheery hello to everyone that passed by and brought laughter and giggles to those around her. She was loving and loved and will be dearly missed. A private gathering will occur with family. The Video Tribute and Recorded Service are available to view below. Special thanks to the staff of Riverview Gardens and her caregivers, Suzie and Jeral. Donations made in memory of Henri to the Alzheimer Society or the Canadian Red Cross would be appreciated. McKinlay Funeral Home, 459 St. Clair Street, Chatham, 519-351-2040 Cemetery Graveside Service Recording - https://youtu.be/5FAQiYiQmck